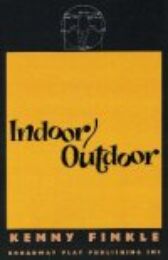 Kenny Finkle's Indoor/Outdoor has both ...

... it's the improbably story of a kitten who follows the path of so many heroes by leaving home to find herself

It is also a clever, big-hearted comedy that makes it easy to feel good

"What a wonderful treatto discover a refreshing and clever play made more, well, `purrrrfect'...

Finkle's story offers a crafty humor and a few lessons in life to be gleaned from it, proving it ultimately touched by a poet" ~ Travis Michael Holder, BackStage

"Samantha is a cat with a story to tell. It's a good story-poignant, witty and even a little wacky at times. And though it's a cat's story, it's human at its core, which makes Kenny Finkle's new play so enjoyable" ~ David Cameron, The Ithaca Journal