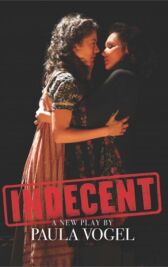 When Sholem Asch wrote it in 1907, he didn't imagine the height of controversy the play would eventually reach

That is, until it was produced in English when the American audiences were scandalized by its lesbian content

"Revelatory As intimate and immediate as a whispered secret. Vogel's play thrums with music, desire, and fear, and it's shrewd about the ways in which America isn't free, and about how art does and doesn't transcend the perilous winds of history" ~ New Yorker