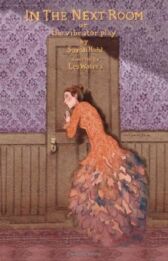 This is a comedy about marriage, intimacy, and electricity

Meanwhile, adjacent to the doctor's laboratory, his young and energetic wife tends to their new-born daughter

And wonders exactly what is going on In the Next Room

And when a new "hysterical" patient and her husband bring a wet-nurse and their own complicated relationship into the doctor's home, Doctor and Mrs Givings must examine the nature of their own marriage and what it truly means to love someone

DOCTOR GIVINGS A man in his forties, a specialist in gynecological and hysterical disorders

CATHERINE GIVINGS His wife, a woman in her late twenties

SABRINA DALDRY His patient, a woman in her early thirties

LEO IRVING Doctor Giving's other patient, an Englishman in his twenties or thirties

ELIZABETH An African-American woman in her early thirties. A wetnurse by default

MR DALDRY Sabrina Daldry's husband, a man in his forties or fifties

"Insightful, fresh and funny, the play is as rich in thought as it is in feeling ... from one of the most gifted and adventurous American playwrights to emerge in recent years" ~ New York Times

"The playwright mines her subject for suitably bawdy humor without resorting to vulgarity. But what really gives the work its distinction is its sensitive exploration of the physical and emotional repression suffered by the women of the era, which has yet to disappear entirely ... The play beautifully balances its humor and pathos" ~ Hollywood Reporter