In Pursuit of Eve 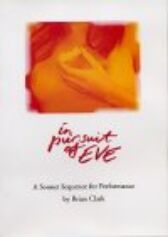 This is the tale of a sexual predator who is forced to face his problem and the damage he has done in the past when he falls in love with a sensitive and intelligent woman. Can he change?

Brian Clark's In Pursuit of Eve deals with these difficult issues head-on and, though shocking in some scenes, it emerges as a profoundly moral piece. As far as the author is aware, this play is unique in that it is written entirely in sonnet form

"It's hardly a new tale - insatiable singleton finds new love - but playwright and performer Brian Clark tells it in a series of sonnets ... The writing is, at times, extremely clever and droll..." ~ Madeleine North, Time Out

"...inspired by [Clark's] intriguing desire to explore the sonnet as a means of telling a love story. Working within such a strict framework ensures that these reminiscences are honed with precision" ~ Philip Chapman, What's On

"...Clark has chosen to deliver his confessional monologue in sonnet form. This certainly gives the piece a disciplined shape and structure and Clark offers some droll observations" ~ Ian Johns, The Times