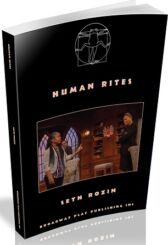 But dormant feelings from an affair years earlier turn a heated argument over science and cultural pluralism into a knock-down, drag-out fight

"Fast-paced and riveting be prepared to have your eyes opened, your own pre-conceived notions debunked, and your head left spinning I highly recommend it" ~ Broadway World

"Plays like Human Rites - thoughtfully written and thought-provoking - are what keep a lot of people, myself included, eagerly going to the theater" ~ WHYY-FM

"It's so refreshing to experience a play that relentlessly challenges its audience to rethink its assumptions, about both big-picture issues and the human characters wrestling with them" ~ Indianapolis Business Journal

"When Westerners decry the practices of other cultures, and campaign for change, they may mean well. But are they really spreading enlightenment, or shame? Who gets to decide whether an initiation rite is barbaric or an exemplary form of bonding? Are there any cultural absolutes, or are all cultural norms equally valid? This constellation of questions animates Seth Rozin's crafty and invigorating play, Human Rites" ~ Julia Klein, Philadelphia Inquirer