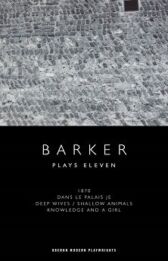 This is the latest collection of plays from one of the most celebrated, influential and studied playwrights in the English-speaking world

Barker's theatre has never sought to reproduce the real world on stage, but 1870 is the first of his plays to be set in Hell

An executed traitor, whose passion for betrayal is akin to a faith, meets other victims of that terrible year in a sordid room

Inevitably they are inspected by God, but in a shape none could have predicted and only he can delight in

In Dans Le Palais Je, Barker's nihilistic landowner at once establishes a different tone as she survives waves of social unrest and outbids the cruel with her own cruelty

In this chaos, she relies on the delivery of obscure but meaningful words which arrive in sealed envelopes to prepare her for a succession of ordeals

Deep Wives and Knowledge and a Girl are short pieces, firmly established in the European theatre repertoire

In the first, a revolutionary movement called the Alterations puts a rich woman in the hands of her servants

The body, and its political meanings, is at the heart of this uncanny work, written for two actresses and a mechanical dog

In Knowledge and a Girl, Barker reinterprets the Snow White fable from the perspective of the Stepmother