How to Transcend a Happy Marriage 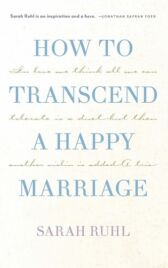 Over dinner with another married couple, George and her husband grow fascinated by stories of their friends' new acquaintance — an intriguing younger woman named Pip

What begins as an innocent intellectual discussion turns into a sexually explosive New Year's Eve party after George extends an invitation to Pip and her two live-in boyfriends, raising the question: What ultimately binds human beings together?

Sarah Ruhl's play How to Transcend a Happy Marriage was first staged at Lincoln Center, Off-Broadway, in March 2017

'Ms. Ruhl is one of the most gifted American playwrights… Her imagination is among the most adventurous at play today in the theater' ~ New York Times