How To Disappear Completely And Never Be Found 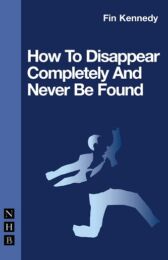 This award-winning play follows one man's desperate attempts to buck the system, and asks what really makes us who we are in the 21st century

When a young executive reaches breaking point and decides to disappear, he pays a visit to a master of the craft in the form of a seafront fortune-teller

Haunted by visitations from a pathologist who swears he is already lying flat out on her slab, he begins a nightmarish journey to the edge of existence that sees him stripped of everything that made him who he was

"An unsettling, dangerous play that makes you want to run away from yourself" ~ Guardian

"Just occasionally you find a piece of new writing that really does restore your confidence in the future of theatre. Fin Kennedy's How to Disappear Completely and Never Be Found is an exciting, exhilarating, extremely funny and deeply distressing picture of the 21st century's disposable society, a parable of contemporary consumerism

Part surreal black comedy, part profound human tragedy, it twists and turns towards a compelling climax that leaves its audience engrossed but exhausted

It is as good as theatre gets and a reminder that in theatre, as in life, the best things often come in small packages" ~The Stage