How to Date a Feminist 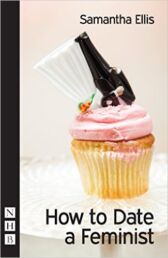 An hilarious new spin on the Hollywood romcom featuring two proposals, two weddings, an elopement and a cast of unforgettable characters ...

She has a fatal attraction to bad men

Then she meets Steve

Steve is a feminist

Can Kate overcome her love of lipstick, cupcakes and Heathcliff?

And can Steve forgo the ethical confetti and learn to be a little bit more ravishing in bed?

And can the two of them reinvent romance for the twenty-first century?