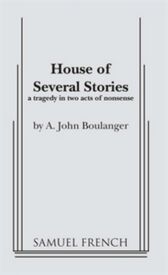 This tragedy in two acts of nonsense, is an absurdist comedy about a dysfunctional family and their Thanksgiving "guests"

Bastian returns home for Thanksgiving with news of "joining the service"

Mother suggests he join a gym

But Bastian's news takes a backseat when his sister, Rissa, suddenly decides that she's pregnant, and though not yet showing, expects to deliver "any minute now"

Both children are then bombarded with Mother's news of an older brother that they've never known about, Thom, who has returned home for Thanksgiving from the war

Things are further complicated with the arrival of the mysterious, young Abigail, who has simply stopped by to drop something off - her newborn baby

That is, until she discovers the baby's father might be in the house

MOTHER - 50s; Sue; warm but absent; never without a cocktail

THOM - 30s; military; a rugged angel; charming with an edge

"One of the few examples of purely American absurdism ... outside of Edward Albee" ~ Austin Chronicle

"An examination of dysfunction, perception and misperception, truth and/or lies, with all roads leading to life's perpetually unanswered question - What is real and true here?" ~ Austinist.com "Boulanger [...] starts with loud chaos, exaggeration and absurdity and gradually endows his characters and story with humanity and depth. " -​ Austin Live Theatre