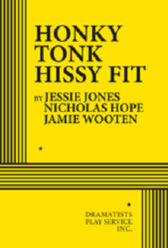 Another laugh-a-minute comedy from the Jones, Hope & Wooten team ...

In this rollicking, hilarious comedy, the gang is back and life in their tiny town has gotten crazier than ever

But no one is listening

Her mother, Caprice, is too self-involved with her “career” as a local celebrity to sense the growing threat

And Sloggett is fighting those romantic feelings tooth and nail

Caprice is also hell-bent on keeping her neighbor and rival, Big Ethel Satterwhite, from horning in on her domain - The Stagger Inn Bar

Big Ethel has her hands full trying to teach the town’s good-ol’-boy police chief, Baby Crumpler, how to dirty-dance for a countywide competition

And as the danger to the town grows, Joveeta can’t even count on the usually reliable and sweet health fanatic Lark Barken

Because she’s currently under the spell of a demon she’s only recently discovered - caffeine!

But as the tentacles of the Corporation envelop them all, can the citizens of this little Texas town put aside their problems and unite behind Joveeta to fight “the big guys” ?