Homos or Everyone in America 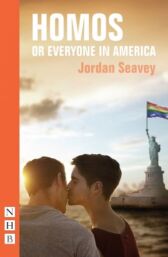 In a supposedly 'post-gay' America on the brink of passing marriage equality, a first date at a New York bar starts two men on a fearless, funny and fragmented journey leading up to a historic moment of change

Homos, or Everyone in America is a raw and provocative portrait of a love story, exploding attitudes, emotions and prejudices that sit at the heart of relationships across the world.

This dazzling kaleidoscope of a play asks us all the question are personal and political choices really all that different?

Homos, or Everyone in America won numerous awards on its premiere Off-Broadway in 2016

It received its European premiere at the Finborough Theatre, London in 2018

★★★★ "A poignant, intimate portrait of modern gay life" ~ The Stage