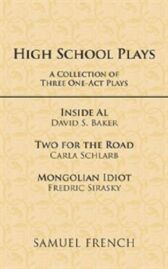 A Collection of One-act Plays

But there are actually two Als in this play - the stricken Al the world sees and the title character who is perceptive, blunt, and sometimes bitter and who comments on Al's life and on the efforts of the kids to help him

Inside Al is a dancer

Winner of the John F. Kennedy Center for the Performing Arts Young Playwrights 1987

They are ignored, so they begin talking about their date the night before

The boy does not remember how it ended because he was drinking heavily; but she is finally able to make him see the awful truth: they died in a car crash and have returned to their high school as ghosts - two more statistics in the rising death toll caused by teenage alcoholism

This moving play is contemporary, hip, and about something that matters

Alex Henderson is smitten with his History teacher, Ms Payton

All of the other students in the class are unseen, so the focus is on Alex as he deals with his feelings in droll asides to the audience during Ms Payton's lectures