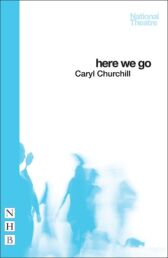 A short one-act play about dying from one of the world's greatest living playwrights ...

And a ginger cat that needs a home

But where is the man now?

Is his heart lighter than a feather?

And how did he die?

And what happens to his friends?

The play runs about 45 minutes

"During the last four decades ... she has been the great experimenter with form, from the centuries-straddling frolics of Top Girls to the near abstraction of Love and Information, and she continues in this fruitful vein with this startling, short play about death ... Mesmerising" ~ Evening Standard

"Unforgettable ... Plays typically serio-comic and challenging games with form, and it sends you back into the outside world valuably disoriented as to how human beings negotiate experiences penultimate, ultimate and conjecturally beyond" ~ Independent

" ... the undiscovered country contains elements of classical, Christian and Coptic mythology. Behind it all lies a yearning for a return in any available form, whether human or animal, just to re-experience life ... What Churchill has written is a striking memento mori for an age without faith; and although her play is brief, that in itself evokes the idea that we are here for a short time and then are suddenly gone" ~ Guardian

It premiered at the UK's National Theatre, November 2015, directed by Dominic Cooke