He Held Me Grand 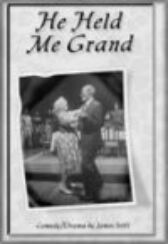 This focuses on one American family and 100 years of its history - music, secrets, humor, tragedy, reunions, death, war, racism, and ghosts all play a part in the rich fabric that helps create a universal identity for the family

It begins with a young man driving cross-country to meet a grandmother he never knew, arriving in the middle of the night with an address in his hand and questions in his heart

Suddenly he's pulled into a tangle of relationships and family dynamics he's never known. Three elderly sisters - April, May and June - are reunited for the occasion of news from the oldest sister. At the age of 88 she's decided to get married-to a man she's met in a chatroom for senior citizens on the Internet!

This surprising announcement sets off unexpected fireworks that ultimately brings the family closer together, though hardly in ways they could have ever imagined

He Held Me Grand is a celebration of growing older in a culture that pretends to grow younger. As one character in the play says - "Ninety-three years sounds like a long time, I bet. It isn't. It goes by surprisingly fast"

A love story that cuts across generations