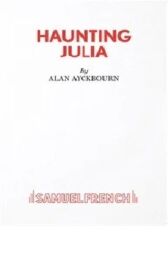 Her father Joe has never come to terms with her death, and in the Julia Larkin Centre For Performing Studies, he hopes to discover what happened by meeting with a psychic, Ken, and Julia's boyfriend, Andy, who was the last person to see her alive

The men meet in Julia's preserved bedroom and Joe reveals that he believes Julia is trying to contact him, haunting him in order to explain what happened

Between the three men, the story of Julia's life and death is gradually revealed - often at odds with what each man believes he knew

Joe, of course, is unwilling to accept his love could ever have led to Julia's suicide

A door onto what should be a brick wall blows open

And Julia manifests herself ...

A play for today. It touches on the failures of education and parenting, on media pressure and overdoses. Kurt Cobain comes to mind. More universally, Haunting Julia mourns how in adolescence and adulthood, we do our loves wrong ~ Financial Times