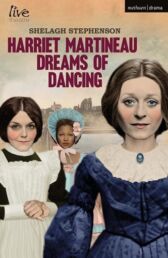 The radical Victorian thinker was a woman ahead of her time - a feminist, abolitionist and sociologist, her works of political philosophy outsold Dickens

Shut off from her usual society, Harriet is visited by a gallery of eccentrics, including ...

Impie, a recent widow who is using her new-found marital freedom to paint murals on the ceilings of her family home

Beulah, the daughter of an escaped slave who prefers dressing as a boy

And Jane, the housemaid, who is adept at putting people into a trance and could help Harriet out of illness