Hanoch Levin - Plays One : Krum & Schitz & The Torments of Job & A Winter Funeral & The Child Dreams 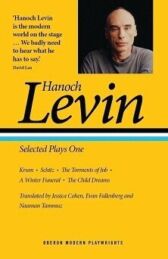 "Hanoch Levin is the modern world on the stage ... we badly need to hear what he has to say" ~ David Lan

Hanoch Levin was one of Israel's leading dramatists

Born in Tel Aviv in 1943, his work includes comedies, tragedies, and satirical cabarets, most of which he directed himself

Levin was awarded the Bialik Prize in 1994

Published in brand-new English translations by Oberon in 3 Volumes, they aim to bring one of the most important playwrights of the Middle East to English speaking audiences

"Hanoch Levin is the modern world on the stage – his version of the modern world with all its hideous but hilarious but contemptible but unavoidable contradictions and ironies and tragedies and pleasures, his world but also ours, even if we rarely chose to acknowledge it. He is the joy of Israel but also its agony, likewise of Palestine, likewise the weakness of the oppressor and the strength of the oppressed, the east but also the west, today but also yesterday but also antiquity. He is a quarrel in a bedroom but also the violent political thrashings about of a nation in turmoil. He is the citizen and the refugee, the lost and the found, the owner occupier and the homeless. The size of his voice is XL, even XXL. His plays offer a huge challenge to our theatres – actors, directors, producers, funders, audience – and therefore we/they need to emulate his courage and put them on the stage. We badly need to hear what he has to say" ~ David Lan

MORE ABOUT THE AUTHOR

Hanoch Levin was one of Israel's leading dramatists. He was born in Tel Aviv in 1943 and studied philosophy and literature at Tel Aviv University. At first he wrote poetry, but later concentrated on the theatre. He became resident playwright of the Cameri Theater in Tel Aviv and also worked with Habimah, Israel's national theater. His work includes comedies, tragedies, and satiric cabarets, most of which he directed himself. In addition, he published five books of short stories and poems, and a book for children. He received numerous theatre awards both in Israel and abroad―most notably at the Edinburgh Festival―and his plays have been staged around the world. Levin was awarded the Bialik Prize in 1994. Levin died of cancer on August 18, 1999. He continued to work even in the hospital, nearly to his last day, but didn't have time to finish the staging of his play The Crybabies. During his lifetime he composed 63 plays and directed 22 of them