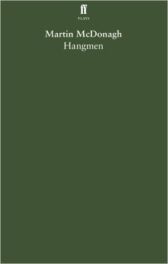 In his small pub in Oldham, Harry is something of a local celebrity

But what's the second-best hangman in England to do on the day they've abolished hanging?

Amongst the cub reporters and sycophantic pub regulars, eager to hear Harry's reaction to the news, a peculiar stranger lurks ...

With a very different motive for his visit

"Don't worry. I may have my quirks but I'm not an animal. Or am I? One for the courts to discuss"

"McDonagh's first play for more than 10 years is tremendous: a departure, and a deepening of his talents. His Irish satires began to exhilarate audiences in the 90s. The Pillowman, staged in 2003, created an entirely new myth and inspired a series of sly, dark paintings by Paula Rego. Now Hangmen fuelled by horror and humour, gives new meaning to the "swinging 60s"" ~ The Guardian