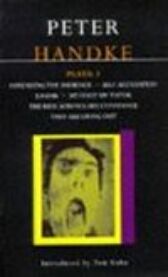 Offending the Audience, is "a dissection of our expectations about what ought to happen in the theatre"

Kaspar is based on the true story of Kaspar Hauser, a sixteen year old boy who appeared from nowhere in Nuremberg in 1828 and who had to be taught to speak from scratch. Handke's play is a downright attack on the way language is used by a corrupt society to depersonalise the individual

My Foot My Tutor is a mime for two actors."Handke has here written an hour-long play without words that may at first look like a piece of audience-provocation but that finishes up as sheer theatrical poetry" - The Guardian

In The Ride across Lake Constance, a group of characters (known only by the names of the actors who perform the parts) talk and play games together and skate over the thin ice that separates them from unspoken danger. "Intensely theatrical...an author for whom playwriting seems akin to tightrope walking" - The Times

They Are Dying Out puts the pillars of the bourgeoisie under the microscope to reveal an alien race, suffocated by rationality, unable to cope with untamed subjective impulses and shows an "uncanny knack for making the familiar seem strange" - Plays and Players