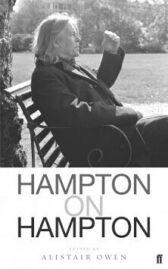 'A lot of my plays begin as comedies and mutate in the course of the evening, because my instinct is that you have to welcome the audience in and make sure they're sitting comfortably before you can give them an adequate punch on the jaw.'

Since the acclaimed London première of his first play in 1966, Christopher Hampton has established himself as one of Britain's most prominent, and least predictable, dramatists

To personal and critical favourites like Total Eclipse and Tales from Hollywood, and in his many translations

In his films as writer-director, Carrington, to his work as screenwriter-for-hire, The Quiet American

Hampton eloquently - and entertainingly - explores his varied career with interviewer Alistair Owen, and discusses its recurring theme - the clash of liberal and radical thought, exemplified by his play, The Talking Cure, about the fathers of psychoanalysis, Jung and Freud

Copy signed by the playwright