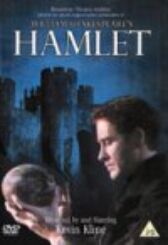 Televised version of Joseph Papp's production of Hamlet for the 1990 New York Shakespeare Festival, adapted by and starring Kevin Kline as the Prince