Hamlet and the Baker's Son - My Life in Theatre and Politics 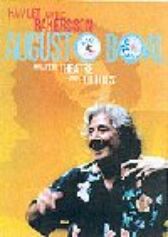 "He is the inventor of the internationally renowned Forum Theatre system and 'Theatre of the Oppressed', including Image Theatre, Invisible Theatre, Rainbow of Desire and Legislative Theatre. He travels the world giving workshops and inspiration to teachers, psychotheraptists, prisoners, actors, and workers in a myriad other fields. Augusto Boal is a visionary as well as a man of his time: the Brazil of military dictatorship and artistic and social repression"

"But this political man of the theatre, and the theatrical man of politics - once imprisoned for his subversive activities - is also a passionately creative force in contemporary cultural life." "From his childhood and early days in Brazil's political theatre movement to his more recent experiments with Forum Theatre as a democratic political process, Boal's story is a moving and extraordinary one. He has devised a unique way of using the stage to empower the disempowered, and taken his methods from the favelas of Rio to the rehearsal studios of the Royal Shakespeare Company"

A distinctive warmth and humour fill these pages, demonstrating Boal's commitment to his personal/political slogan: 'Have the courage to be happy!'