Hamilton and Me - An Actor's Journey 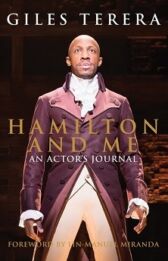 'One of the most joyous and clear-eyed approaches to playing a character that I have ever read… I am so grateful Giles took notes on his process and turned them into this book. I was already in awe of his performance; now I'm in awe of his humanity and attention to detail and willingness to share the hard work and magic that goes into it' ~ Lin-Manuel Miranda from his Foreword

When Lin-Manuel Miranda's groundbreaking musical Hamilton opened in London's West End in December 2017, it was as huge a hit as it had been in its original production Off and on Broadway

Lauded by critics and audiences alike, the show would go on to win a record-equalling seven Olivier Awards – including Best Actor in a Musical for Giles Terera, for his portrayal of Aaron Burr

For Terera, though, his journey as Burr had begun more than a year earlier, with his first audition in New York, and continuing through extensive research and preparation, intense rehearsals, previews and finally opening night itself

Throughout this time he kept a journal, recording his experiences of the production and his process of creating his award-winning performance

This book, Hamilton and Me, is that journal.

It offers an honest, intimate and thrilling look at everything involved in opening a once-in-a-generation production - the triumphs, breakthroughs and doubts, the camaraderie of the rehearsal room and the moments of quiet backstage contemplation – as well as a fascinating, in-depth exploration of now-iconic songs and moments from the musical, as seen from the inside

It is also deeply personal, as Terera reflects on experiences from his own life that he drew on to help shape his acclaimed portrayal

Illustrated with dozens of colour photographs, many of which are shared here for the first time, and featuring an exclusive Foreword by Lin-Manuel Miranda, this handsome Hardback is an essential read for all fans of Hamilton, offering fresh, first-hand insights into the music and characters they love and know so well as well as aspiring and current performers and students

A great read, with beautiful photographs and steeped with history and experiences from Terera's view. If you love Hamilton you will love this book! ~ Confessions of a Bookworm

Insightful, honest, and reflective... throughout, Terera writes with a clarity that allows even those who have never experienced what it takes to bring a show to stage to become absorbed within that alien world... don't throw away your shot to read this excellent book - grab a copy today ~ FIVE STARS - Everything Theatre

A smart blend of memoir and vital insight into what performers go through to get a show on the road... an absolute delight. Illuminating about both the craft of acting and the glorious show that is Hamilton, it takes you on a whirlwind journey through what was clearly an incredibly important period in Giles Terera's life. Thoroughly recommended for anyone with an interest in acting, Hamilton, or just theatre in general ~ FIVE STARS - Mind The Blog

Masterful and excellently written... offers audiences and readers the chance to not only be in the 'room where it happens' but also to smell the sweat, feel the pulsing hearts and hear the resonance... deserves a permanent place on aspiring musical theatre performers' bookshelves ~ The Reviews Hub

The author’s credentials as a Hamilton expert are second to none ... the real strength of this book lies not only in its affection for the show and the company but also a great deal of detail about the topsy-turvy adventure of bringing it to the stage... a highly articulate, very thoughtful and hugely enjoyable read ~ British Theatre Guide

A rare insight behind the scenes ... fascinating, well-written, relatable and engaging ... if you're a fan of Hamilton, an aspiring actor, or just a lover of history, this book will inspire you to take a look at those characters and performers you admire and see them in a different way ~The Play's The Thing UK

An inspirational and insightful read... the level of detail that the book affords into the rehearsal process is particularly fascinating, taking us so far behind the scenes you can smell the greasepaint ... jam-packed full of hard-won insights and all kinds of practical advice ~ There Ought To Be Clowns

And Rise Up! Broadway and American Society from Angels in America to Hamilton