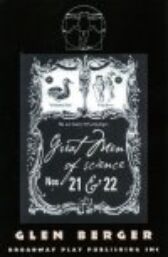 It is Paris, 1738, and the Royal Academy of Sciences has just announced their annual contest - "prove or refute that there is wisdom and design behind the seeming randomness of the universe"

Jacques de Vaucanson shall prove it, and thereby win the heart of Gabrielle du Chatelet, by constructing the first biologically accurate automata the world has ever seen - a clockwork duck, that flaps its wings, eats, and excretes ... just like a duck

A half-century later, the Reign of Terror in full swing, Lazarro Spallanzani labors to complete his one last experiment, if only his long-suffering housekeeper would stop distracting him ...

Winner of the 1998 Ovation Award for Best Play, as well as the A.S.K. Playwriting Award

"The strength of Berger's mesmerizing piece of storytelling lies in putting science in its place by showing its early practitioners as dreamy romantics bent on proving the existence of a rational God" ~ L.A. Weekly

"The strength of their belief and their passion to strive beyond their reach is admirably noble, and, in this brilliant playwright's hands, supremely intelligent, totally absorbing, and above all, riotously funny" ~ Backstage West