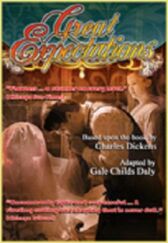 At its premiere at the Paper Mill Playhouse audience and critics cheered this new adaptation of one of the greatest novels in the English language - a story of pride and ambition blinding a soul to the true values of life.

Here are all the memorable characters ...

Young Pip, the blacksmith's apprentice whose secret benefactor gives him his great expectations of becoming a London gentleman

Her adopted daughter, Estella, whom she has trained to break men's hearts

And his shrewish wife

And of course the escaped convict, Magwitch - the scarred man who is stalking him

The production can be played simply on a set which cleverly takes the audience from the windswept marshes to gloomy mansion, bustling London and even a boat collision on the Thames

Gripping drama, delightful humor and a true Dickensian flavor all the while

"Gale Childs Daly's exceptional new adaptation is uncommonly tight and suspenseful. With their multiple plots, Dickens novels often are tough to adapt. This one keeps the storytelling, and the hero, front and center. Truly, it's a riveting cutting and shaping that is never dull for a moment" ~ Chicago Tribune