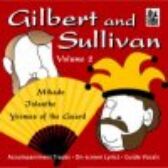 Featuring some of the best known songs from Mikado, Iolanthe and Yeoman of the Guard, this CD of Vocal & Backing Tracks has been recorded in the original show key and tempo with a full symphony orchestra, cast and chorus

This enables the performer to learn a song by singing along with the vocals and music, and then practice their technique accompanied only by the Backing Track

But if you have a karaoke machine, the lyrics will magically appear on-screen as it's also CDG compatible

A Wandering Minstrel I

As Someday It May happen

The Sun Whose Rays Are All Ablaze

On a Tree by a River a Little Tom-Tit

When I Went to the Bar as a Very Young Man

When You're Lying Awake with a Dismal Headache

If You Go in you're Sure to Win

Yeoman of the Guard

When Maiden Loves, She Sits and Sighs

I Have a Song to Sing O!