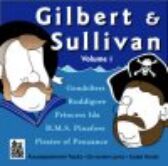 This CD has been recorded in the original show key and tempo with a full symphony orchestra, cast and chorus

This enables the performer to learn a song by singing along with the vocals and music, and then practice their technique accompanied only by the Backing Track

But if you have a karaoke machine, the lyrics will magically appear on-screen as it's also CDG compatible

When Fred'ric Was A Little Lad

Oh Is There Not One Maiden Breast?

I am The Very Model of A Modern Major General

When A Felon's Not Engaged

I am The Captain of the Pinafore

When I Was A Lad I Served a Term

To A Garden Full of Posies

Take A Pair of Sparkling Eyes