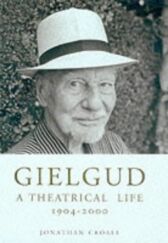 The highly praised biography of the greatest classical actor of the twentieth century, whose astonishing career spanned nearly eighty years in films, radio, television and the theatre

For his superbly written, honest and rounded life of this much-loved man, Jonathan Croall has talked in detail to more than a hundred friends and colleagues who worked with Gielgud

His work with contemporary playwrights such as Harold Pinter

"A remarkable achievement ... a worthy tribute to a loveable man and a dedicated artist" ~ Times Literary Supplement

"As much a history of theatre as a biography, it is a model of research and readability" ~ Independent