Giants Have Us in Their Books - Six Children's Plays for Adults 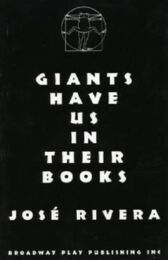 The six one-act plays in this Collection are ...

"Jose Rivera's GIANTS HAVE US IN THEIR BOOKS, is subtitled `Six Children's Plays for Adults'. The genesis of the plays, he explains in a program note, was his four-year-old daughter's observation that, if we have giants in our fairy tales, they must have us in theirs

Rivera wrote the plays, he says, `as if we were the subject of fairy tales told by giants'

It's an apt notion

The six short plays in GIANTS have all the beautiful simplicity of fairy tales ...

Rivera's prose has become more concentrated and spare, more pregnant with metaphor and poetry. The profuse and sometimes self-consciously fantastical stew of magic realism--which, like his mentor, Gabriel Garcia Marquez, Rivera insists is just another form of everyday reality--has been condensed so that each image carries greater weight. The six short fables in GIANTS add up to two hours of compelling, entertaining and provocative theater" ~ Robert Hurwitt, San Francisco Examiner