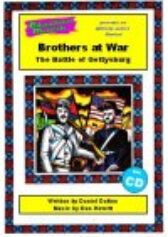 The story also focuses on Jennie Wade, a friend of the Unionist soldiers who was the only Gettysburg citizen to be killed during the battle

Characters - 7 main parts, 9 soldiers, 5 others, (number of soldiers is flexible but nine have spoken lines)

We Are The Breadmakers

This Time Of War - The Thomson Family
The Mighty Unionist Army - Unionist Soldiers
The Confederate Army - Confederate Soldiers
The Civil War? - Mr. and Mrs. Thomson
Our Town - Jennie Wade, Mrs Mclellan, Margaret & Paul Copp
The First Encounter - Soldiers (Unionist & Confederate)
A Song for Jennie - Mother & Mrs Mclellan
The Battle - All Soldiers
Why Did It Come To This? - John & Richard Thomson
Home - The Thomson Family
Freedom! - All