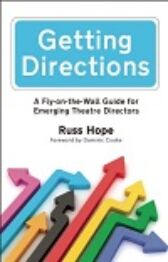 The theatre rehearsal room is a sacred place - what goes on there is mysterious, alchemical and closely guarded

So how are aspiring theatre directors supposed to learn their craft?

In Getting Directions, Russ Hope gives us the benefit of unprecedented, fly-on-the-wall access to eight rehearsal rooms

He has shadowed some of the UK's most exciting young directors at each step of the way, on productions as diverse as Shakespeare at the Globe, Greek tragedy at the Gate, Tennessee Williams at the Young Vic, panto at the Lyric Hammersmith, and a touring Dickens dramatisation

Describing each of these rehearsal periods from first concept to first night in revealing and often remarkable detail, Hope gets under the skin of the professional director, and reveals the decisions they must make on a daily basis - how best to arrive at a concept and communicate this to a design team?

Which games and exercises really help to unlock the text for actors?

And what should you do if everything is falling apart during the tech?

Getting Directions will equip emerging directors with a practical handbook, not bogged down with theories or precepts, that lifts the lid on what it means to be a director

The result is both a portrait and a masterclass from a generation of theatre practitioners, essential reading for anyone who wants to follow in their footsteps, or to understand what directing really entails