Genre - A Guide to Writing for Stage and Screen 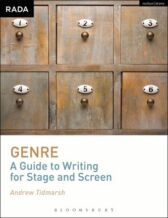 What does Much Ado About Nothing have in common with When Harry Met Sally?

Investigating how the relationship between form and content brings endless discoveries and illuminations about how narrative works, this entertaining and accessible book looks at how storytelling in film and theatre has evolved and how an appreciation of form can bring the writer, director or actor a solid foundation and a sense of security, which ultimately assists the creative process

Genre - A Guide to Writing for Stage and Screen is for all those with an interest in story and can be used by writers, actors and directors alike whether students or experienced professionals to make the blank page appear less terrifying

Chapter 1 The Building Blocks of Narrative
Chapter 2 Will Versus Fate: Greek Tragedy and the Fundamentals
Chapter 3 Let's See Blood: Roman Tragedy and Quentin Tarantino
Chapter 4 Revenge is Sweet: Elizabethan Tragedy
Chapter 5 Mashing It Up: Desperate Housewives, Jacobean Tragedy and Buffy
Chapter 6 The Plate of Sardines: New Greek Comedy, Menander and Frasier
Chapter 7 Archetype or Stereotype? Plautus, Comedy of Contradictions and The Sketch Show
Chapter 8 Happily Ever After: Romantic Comedy from Shakespeare to Sleepless in Seattle
Chapter 9 Minding Our Manners: The Country Wife and Mean Girls
Chapter 10 Nothing Ever Happens: Chekhov and the Contemporary Independent Comedy
Chapter 11 Arrivals and Departures: The Chivalric Romance and the Pastoral

Appendix 1: Miscellaneous Genres and Hybrids
Appendix 2: Other Theories and Other Approaches

Andrew Tidmarsh is a writer, theatre director and awardwinning film-maker

He has worked with undergraduate and postgraduate writers for nearly 20 years for various institutions: Goldsmiths, University of London, Drama Centre, University of the Arts, and the Royal Academy of Dramatic Art

He has also worked in the Philippines, Germany and Canada and currently teaches and directs at RADA