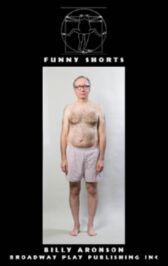 "Aronson has demonstrated he has a keen sense of what makes a good one act. Madcap mayhem worthy of the Marx Brothers without censorship. Bravo" ~ CurtainUp

Edgy and original, here's what the critics had to say ...

"Takes its on-target premise to the horizon of absurdity. The denouement is a wicked reversal of rules about who sleeps in whose bed, and the logic is priceless. Aronson has nailed these parental holy wars and couples' skirmishes with a keenly observant eye" ~ Village Voice

"Touching and surreal. Depicts that strange period of time when one realizes the death of a loved one is inevitable and that knowledge makes time with the person change shape; even the cell phones take on a new, magical meaning" ~ Variety

"Mordantly funny. The playwright finds a formula for family and love in an age of fractured marriages, lack of communication and yearning for union" ~ New York Times

"Highly amusing look at the boiling sexual intrigue and artistic warfare behind the scenes of a children's television program. These battles explode in a Bacchanalian conclusion that makes the murderous gunslingers of the Wild West look rather civilized" ~ New York Times

IN THE MIDDLE OF THE NIGHT

"The play takes a decidedly loopy turn, and the delight is all the more piquant for being a surprise. From then on, the alumni who show up (including a major celebrity whom you'll know but never guess) have, suffice it to say, unusual résumés. That the reunion proceeds with every familiar emotional trapping nonetheless is funny and even touching" ~New York Times