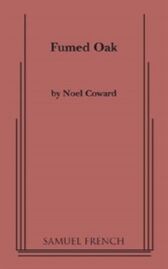 Subtitled An Unpleasant Comedy in Two Scenes, this one-act play comes from Coward's Tonight at 8-30

In the middle class drawing room of amiable and hard working Henry Gow passes most of the family life surrounding his harridan wife Doris, his brat daughter Elise, and his complaining mother in law Mrs. Rockett

So he reveals his plans for escape, his long time saving which now makes it possible for him to leave

He vows never to see his family again, jauntily leaves, and saucily slams the door