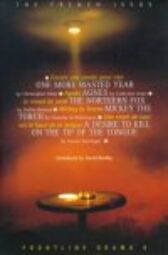 Published in conjunction with the Royal Court Theatre, this volume includes translations of five extraordinary new plays from France published for the first time in English

One More Wasted Year by Christopher Pellet presents two young men who inhabit a world of cafes and rented bed-sits, in their late twenties they already seem to old for a youth-obsessed world

In Mickey The Torch by Natacha de Pontcharra, Mickey works as a nightwatchman in a bleak contemporary cityscape

A Desire to Kill on the Tip of the Tongue by Xavier Durringer is the story working-class youth adrift and prey to the needs for sex, drink or drugs, it shows the shifting relationships between a group of friends hanging about outside a disco

The translators are Martin Crimp (One More Wasted Year); Nigel Gearing (Agnes); Annabel Arden (Mickey the Torch); A Desire to Kill on the Tip of the Tongue (Mark Ravenhill); Gillian Hanna (The Northern Fox)