From Here to the Library 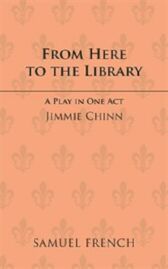 Beryl Tidy, whose life is dominated by her elderly, irascible and demanding father, has a new boss at the library

Mr Gostilow has just moved to the North from London

When Beryl storms out of work after an uncharacteristic fit of temper and fails to return, Gostilow visits her to find out why

Despite the idiosyncratic and often hilarious comments from Beryl's father, Gostilow succeeds in showing her that she needs and is needed by the world outside