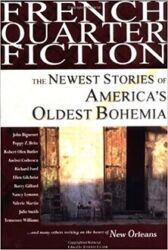 As one of the world's most legendary and unique places, for three centuries the French Quarter of New Orleans has been home and muse to countless artists

Anchored in this setting, 37 short stories are collected here for the first time

These works branch across every genre from mystery to romance to surrealism and prose poetry, as incomparable as the neighbourhood from which they sprang, forming an eclectic mix of some of the most exciting modern fiction found anywhere

These characters also find themselves everywhere from Sarajevo on the eve of World War 1 to Algiers Point just across the Mississippi River, and their stories wander from the eighteenth century New World to a rooftop view of Bourbon Street as the third millennium begins

But most importantly, these are stories for anyone who loves great fiction, regardless if they have even heard of the French Quarter

Whether it's flash fiction, horror, or satire, when it comes down to it, these are simply great stories - breathtaking, beautiful, poignant, tragic and comic