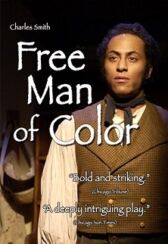 Reverend Robert Wilson, third president of Ohio University, brings John Newton Templeton, a young ex-slave, to Ohio University to be the first man of color to attend the college

Although Ohio is a free state, slavery is still the law of the land in much of the country, so upon his arrival, Templeton is unable to be housed with the other students

Jane Wilson pointedly asked her husband, "You expect these men to share a room with a black man who is not washing their clothes and serving them dinner?"

Much to Jane's consternation, Wilson's solution to the problem is to board Templeton in their home and have him work as a "student servant" while attending classes

Though he excels in his studies, Templeton is frustrated with not being housed with the other men

Eager to please and convinced he has been born to fulfill some special calling, Templeton accepts Wilson's word as gospel

But Jane Wilson is suspicious of her husband's motives and jealous of the opportunity for higher education afforded Templeton, especially since she, as a woman, is not allowed the same privileges as an ex-slave

She goads Templeton at every turn, eventually pushing him to carefully examine why he was chosen to be the "first"

As graduation nears, Templeton is offered the appointment of governor of Liberia

Finally, his choices and achievements are ultimately quite different than anyone expected