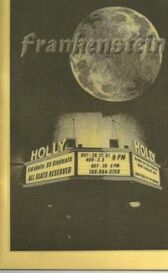 This adaptation of the greatest horror story ever written is true to Mary Shelley's novel, which has far more drama and tragedy than the Hollywood versions

The main characters are first introduced as children, presenting Victor as inquisitive and longing to help mankind even at an early age

The Monster was not really a monster

He was a being created by someone who, although of noble purpose, had no concept of the possible consequences of his work