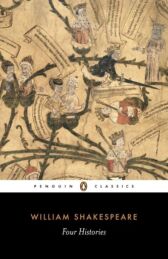 Each play possesses its own distinctive mood, tone and style, and together they inhabit the turbulent period of change from the usurpation of the throne of Richard II by Bolingbroke to the triumph - some would say triumphalism - of heroic kingship in Henry V.

While Walter Pater in his famous essay found the central idea of the Histories to be 'the irony of kingship - average human nature, flung with wonderfully pathetic effect into the vortex of great events', others have interpreted the plays as political moralities, or as specifically Tudor versions of history

Many will agree with the Duke of Marlborough, who said he was content to know no more English history than that dramatized by Shakespeare

In this collection each play is accompanied by notes and an introduction, making this edition of particular value to students and theatre-goers