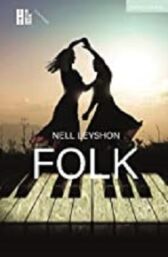 Nominated for an Olivier Award 2022

"I'll tell you one more thing. I got more songs in my head than I ever told you. I got enough to sing for days ..."

Rooted in the land where she has lived her entire life, Louie Hooper’s mind overflows with its songs - more than 300 of them passed down from her mother

Cecil Sharp, a composer visiting from London, fears England’s folk songs will be lost forever and sets out on a mission to transcribe each and every one

The production was revived in June 2022 due to popular demand

"FIVE STARS! Leyshon’s poetic way with words, the subtle modulations of Roxana
Silbert’s scenically humble production and the superb, lived ­in detail of the four actors hold us in thrall. This wonderful play deserves to endure" ~ Daily Telegraph

"FIVE STARS! Setting the bar for new writing impressively high with this beauty.
Breathtaking writing, flawless staging. Folk deserves to be around for a very long time" ~ WhatsOnStage