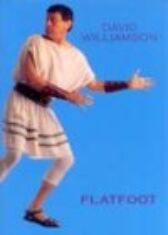 Flatfoot (aka Roman playwright Titus Maccius Plautus) pops up in the 21st century, enraged to find his ideas have been plundered through the ages by everyone from Shakespeare to sitcom writers

To prove his point, he takes us back to Ancient Rome, where he must convince his producer, Crassus Dives, that his new play will be a hit, won't offend the Roman Censor, and won't give servants ideas above their station

The trouble is the play hasn't been written, so Plautus must act it out before the cynical producer, making it up as he goes along

Pandemonium lurks just around the corner as, with a little help from Cleostrata, his Greek wife, ex-dancer and seductress extraordinaire, they tackle all ten roles between them

This is a boisterous comedy for all ages from Australia's best loved playwright ...

'I've always been fascinated with the old Greek and Roman comedies. In the plays of Plautus, the person the audience always identified with was the clever slave who outwitted everyone else

It is thought that Plautus started life as slave and thus buried a quite trenchant criticism of Roman Society under the surface of his comedy. He only got this criticism past the censors by pretending his plays were set in Greece

The people the Romans loved to hate were exactly the same persons that we love to hate - the vainglorious braggarts, the wheedling ingratiators, the pompous, the arrogant, the miserly, the backbiters, the gossips, the duplicitous, the crass' ~ David Williamson