Five Times in One Night 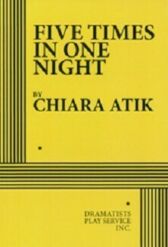 In this comedic quintet, five couples explore the delights and disappointments of their sex lives

Whether they are the first two people on Earth

Or the last two

Or modern partners with shifting needs

Or exes on the eve of a life-altering event

Taken together, Five Times in One Night is a hilarious examination of intimacy through the ages

“… a lewd title and a tender heart … specific and universal, mirthful and agonizing” ~ NY Times

“One of the most highbrow sex comedies I’ve seen. It’s smartly and tightly written … While Five Times in One Night covers a broad swath of history, it’s a strikingly contemporary play” ~ CurtainUp.com

“… five self-contained shorts add up to a heartfelt, whimsical look at the reasons we pursue sex and the means we employ in order to have it … this delightful night of one-acts explores the motives and consequences behind the world’s simultaneously most revered and most stigmatized pastime” ~TheaterScene.net.