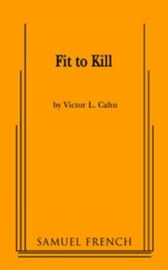 A thriller about strategy, betrayal, and deception ...

Adrian, a charming but self-indulgent chess master, enjoys a life of luxury thanks to his marriage to Janice, an older but still sexy and vibrant woman who has made a fortune as the CEO of an exercise empire

The arrival of Amy - a reporter with an agenda of her own - unleashes a whirlwind of deadly schemes that will keep audiences guessing until the final seconds ...

"Deliciously scary ... an event worth celebrating ... [Cahn] establishes himself a master of black comedy involving murder in the great tradition of Wait Until Dark, Deathtrap, and Sleuth ... a tour-de-force achievement" ~ United Press International

"A comedy noir that tells of infidelity and murder, with a healthy dose of humor and requisite multiplying plot twists ... a witty pulp thriller" ~ Timeout, New York

"A thoughtful cat-and-mouse game that will keep you interested from beginning to end ... revelation after revelation ... solid entertainment and good fun" ~ Troy Record