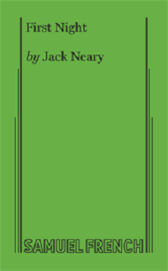 It is New Year's Eve, and Danny Fleming is waiting to close up the video store where he works

The only prospect the new year holds for him is in an as-yet unsigned contract, which would make him manager of his own video outlet - a reluctant step towards making himself "real"

Then, one hour before closing, in walks Meredith O'Connor

Back in the eighth grade, Meredith sparked Danny's adolescent fires, but she went out of his life to pursue her vocation and become a nun

Now she's back, and the sparks fly when Danny learns she has left the convent to seek him out

Danny doesn't want a woman on the rebound from the Almighty, but as Meredith sees it, God made both the religious and secular worlds, so the religious world isn't losing a daughter, the secular one is gaining a nun

How can Danny resist?

It is, indeed, a first night to remember as Danny realizes dreams aren't just something to hold at arm's length.

A bright, warm, witty comedy two-hander about dreams, life, and love that had critics and audiences cheering from coast to coast

"Sweet, fast, funny . . . a lovely riff of magic. Touch it for yourself" ~ Boston Globe