Fiddler on the Roof - 2 CDs of Vocal Tracks & Backing Tracks 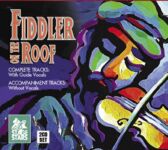 Large Mixed Cast
"A fiddler on the roof. Sounds crazy no?"

These eight words open the first scene, of one of the greatest works of the American musical theatre, a show that has capitivated the world, since it first opened on Broadway in September, 1964

Set in Eastern Russia in 1905, the show has been played by an orchestra of various sizes but if you lived in the village of Anatevka, you would have been listening to a small group of musicians known as Klezmorim who played what we call today traditional Yiddish music

Here Producer Stephen M. Pearl has re-orchestrated and recorded this version of Fiddler on The Roof with a Klezmer Band It features a full cast of actors and actresses singing the songs, with an accompaniment of standard Klezmer instrumentation, such as Clarinets, Flute, Trumpet, Tuba, Accordion, Guitar, Bass, Drums, and of course, Violin

They enables the performer to quickly learn a song by singing along with the vocals and music, and then practice their technique accompanied only by the backing track

Click the Speaker to hear a Sample of any of the 16 Songs ...

If I Were A Rich Man

Now I Have Everything

Do You Love Me?

Far From The Home I Love