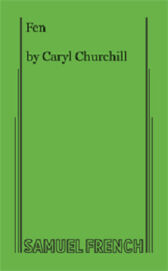 This remarkable playwright shows still another aspect of her talent in Fen, which takes place in England's fen country and focuses on a gang of women landworkers. The play looks at their work situation and their private lives and dreams

In particular, we follow the story of Val, who leaves her husband and children to live with a farm worker, Frank

Other characters include Angela, the outsider who torments her stepdaughter Becky; Alice, who has turned to religion; Nell, who tries to assert her rights against the farmer; Shirley, who prides herself on keeping going

"Ms. Churchill has put together with grace and anger and a generous humor an evening almost entirely composed of wants" ~ Sunday N.Y. Times

"Ms. Churchill... possesses one of the boldest theatrical imaginations to emerge in this decade who is amazingly enough plowing new ground in the theater with every new play" ~ N.Y. Times