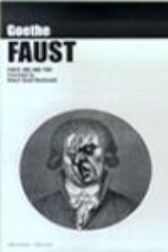 The power and magic of the Faust story, the man who, in a pact with the Devil, trades his soul in return for a period of total knowledge and absolute power, is one of the most potent of all European myths

He reshaped the perpetually fascinating legend, probing the nature and process of human striving and questioning the assumed divisions between the forces of good and evil

His Faust has become a landmark in world literature

Robert David MacDonald's translation of Faust offers access to the play in the English language for readers and playgoers alike and opens up the extraordinary range and pace of Goethe's language, rhythms, imagery and ideas, without sacrificing any of the play's humour

Robert David MacDonald has translated over seventy works of European drama. His translations and many original plays have been performed around the world, including productions at the National Theatre and the Royal Shakespeare Company, in the West End and on Broadway

He holds the Goethe Medal for Services to German Literature