Father Comes Home from the Wars 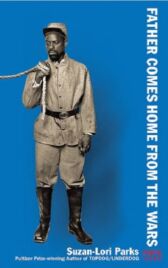 The stunning first installment of a new American Odyssey, set over the course of the Civil War, and penned by Pulitzer Prize & Tony Award winner Suzan-Lori Parks

Offered his freedom if he joins his master in the ranks of the Confederacy, Hero - a slave - must choose whether to leave the woman and people he loves for what may be yet another empty promise

As his decision brings him face-to-face with a nation at war with itself, the loved ones Hero left behind debate whether to escape or wait for his return, only to discover that for Hero, freedom will may have come at a great spiritual cost

"Father Comes Home From the Wars (Parts 1, 2 & 3), swoops, leaps, dives and soars across three endlessly stimulating hours, re-imagining a turbulent turning point in American history through a cockeyed contemporary lens ... the best new play I've seen all year ... The wonder of Ms. Parks's achievement is how smoothly she blends the high and the low, the serious and the humorous, the melodramatic and the grittily realistic;[she has] a voice that can transform blunt, vernacular language into fluid, flowing free verse" ~ Charles Isherwood, New York Times

"A nine-part serial whose first three parts are now being produced ... Can one-third of something already be a masterpiece? Seems like it to me .... People long for stories that engage the deepest possible issues in the most gripping possible ways. Father Comes Home From the Wars is one of those stories -- or maybe more than one" ~ Jesse Green, New York Magazine

"Brilliant, beautiful ... With this vibrant freestanding trilogy ... Parks has achieved something that engages with a bold theatricality both lyrical and raw, without sacrificing any of her thematic ambition or her structural and intellectual complexity. Each of the three parts thrums with its own vitality [and they] form a mutually invigorating whole. Parks' incomparable command of percussive vernacular is no surprise, and her dialogue here might just as easily be sung. This haunting work is funny and tragic, whimsical and lacerating, poetic and poignant, navigating its radical tonal shifts with fluidity and grace" ~ David Rooney, Hollywood Reporter

"The best new play of the year... It is bold, hugely entertaining, moving and thrillingly ambitious" ~ Michael Giltz, Huffington Post